Wouldn’t it be great if we could use effective testing to develop a better, more polished app and provide a better user experience through automated tests?

Initially associated with extreme programming, which aims to maximize software quality and responsiveness, TDD has been around for more than two decades now. In the recent past it has, however, grown in popularity as a „standalone“ approach to generate better source code and increase the productivity of development teams.

What is test driven development?

In a few words TDD is a „test then code“ approach. The base idea is that if developers use test cases before implementing functionality they can create better software and reduce the time to market.

Developers who are using TDD as their coding approach first define test cases before they even write a single line of code. Through this process they are forced to think about how the software will be used and what design it needs to provide the expected functions and usability. As soon as a test fails, the developer understands what needs to be fixed and refactor the code, which is basically to rewrite the code to improve it without altering its function.

Through TDD we focus on the code necessary to pass all tests, reducing it to essentials. We use the test unit or smallest bit of functionality as the basis – consider it as building a house brick by brick – no brick is laid down before it’s clearly tested, ensured it’s sound and it’s an integral part of the design.

While TDD is fully compatible with agile methodologies, it focuses only on how code gets written instead of the overall development process. The benefits of both combined can be used to develop high quality software using test-then-code approach in short development sprints. 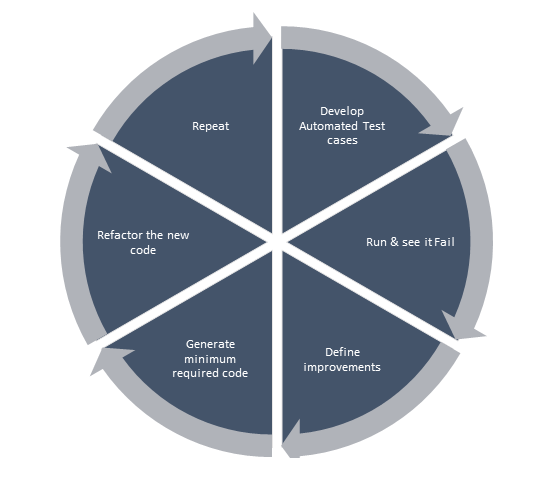 Unittests make sure the code stays clear and focused through each stage of development. Automated UnitTests can highlight mistakes and their effect on the whole system, which in turn enables developers to find bugs and problems that arise as a result of the changes they have most recently made. This empowers developers to create software that is solid and works as intended.

Implementing TDD empowers us to spot functionality issues while the software is being developed, which allows us to address them more quickly. Whenever you need to create an application that is fully functional from its very first release, TDD can help you ensure your application achieves its purpose and create a unique and valuable experience for the user.

Through refactoring the code gets cleaned up constantly and making room for much more source code to be added. TDD can tighten up the code and place it where it belongs in the codebase which results in a tidy codebase, free from unnecessary duplications, which ensures the software is easy to tweak and maintain and every function is implemented in a single point of responsibility.

Simplify source code and check the quality of it

Test driven development requires developers to write code in response to acceptance criterias. This approach ensures the simplification of code as it can prevent „over-engineering“ and help keeping the codebase streamlined and easy to use. There are no doors left for redundant or unnecessary code. Tests can also create quality metrics for our code. The development team can use TDD to effectively determine how good the source code is. Using this approach while developing software they can develop more consistent code and fix any cracks.

Many short and quick iterations mean that developers can receive feedback from clients more often and quickly than with more traditional approaches to software development. The benefit here is, that we can use this feedback to craft a better, stable and preferred used piece of software. Clients also benefit as they can choose to be more involved in the process and review iterations more frequently.

TDD increased the productivity of development teams by focusing their energy on passing tests, which is accomplishing goals. It enables you to develop a function piece of software for users in a shorter timeframe than many other prgramming practices. This is a main advantage in today’s competitive software market, where shorter release cycles and better application availability is one of the key factors that determine success.

TDD can help us build software that’s reliable, usable and easy to extend. It focuses on what is important, which can help us optimize costs.

Wether you’re starting a greenfield project or redesign legacy software into a more effective solution of your business, Test driven development will be the right approach to you.

While TDD proposes a better way to develop applications, it doesn’t magically solve all issues that occur while software engineering. Having clear requirements and communicating them remains crucial for every success.